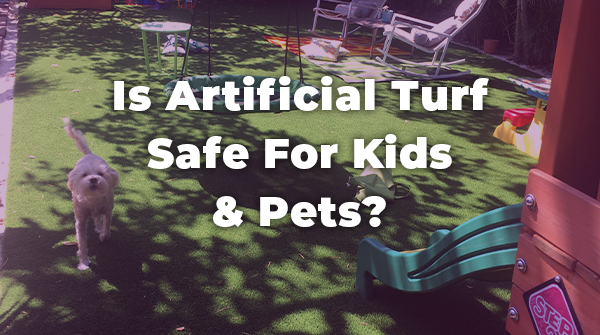 As parents to our little ones, our top priority is always their safety. Their well-being is protected at all costs, even more than ours. We want them to grow healthy, well-rounded, and with love for themselves much as we have.

This is why the first thing we ask ourselves when we see artificial grass is… “Is artificial turf safe for my children?”

Is it, really? To understand this, we must first dig into the composition of artificial turf.

What is artificial grass made of?

Most artificial turfs are made of polyethylene. It’s the kind of plastic used to make children’s toys, grocery bags, and even bullet-proof vests. Polypropylene is also in the mix. This is commonly used for plastic utensils and microwavable containers. Nylon is also used for heat resistance.

Are these the materials that make artificial grass dangerous?

No. An article from The Washington Post written by Stuart Shalat, an Environmental Health Professor, discusses this topic. And we’re more than happy to give you his insights for your reference.

Shalat says, “Based on studies I have reviewed and conducted, I believe there is a potential health risk because of the chemicals in tires, which are recycled into crumbs to support the plastic blades of synthetic grass.”

What is artificial turf made up of?

As Shalat talks through, “Artificial turf is made up of three major parts:

What makes them harmful?

Shalat points out, “Various pigments are used to provide the green color of the blades. These can include lead or titanium for the white lines and still other metals for school logos on the field.

Those little black crumbs are the problems. Tires can be toxic.”

Is artificial turf safe for kids?

Yes, definitely! Crumb rubber made from the ground up recycled tires are the culprits that make artificial grass unsafe. These are the properties that give artificial grass such a bad reputation. The good news is: putting infill is optional. Also, there are no natural alternatives to it like crushed rocks. Artificial turf with toxic amounts of lead has also been discontinued by turf manufacturers. We’ll discuss these more in-depth in the later paragraphs.

What’s important now is that you know that generally, the artificial grass blades are safe for your kids. You can definitely have artificial turf at home without crumb rubber endangering your lives. However, there is some low-quality turf grass out there. We don’t know what they’re made of, and we can’t vouch for them either. If you want to be sure that your kids are safe, go for manufacturers that pride themselves for being non-toxic and lead- free.

Fortunately, there are brands that go above and beyond the general rule. By offering non-toxic, lead-free, toxin-free artificial grass, King Turf ensures not only your kids’ safety.

But yours as well.

Is Artificial Turf Safe for Pets?

Our furbabies aren’t so different from our tiny humans, are they? They’re all whiney poop machines who are constantly hungry for food and attention. But we love them all the same. If we could give them everything, we would. This is why we’re looking for answers. We wanna know that an investment as big as artificial turf won’t be any harm to them. And hopefully, they’ll benefit from it as much as we will.

The major health concern about synthetic grass of the past is lead exposure. Thankfully, in 2008, the Center for Environmental Health (CEH) and major turf makers agreed to ensure artificial turf safety by freeing it from lead.

Another safety concern with artificial grass is the tripping hazard on uneven surfaces. This is also a problem with natural grass because you won’t be able to see uneven surfaces in a manicured lawn. The best thing about artificial turf is that if it is installed by a professional, you don’t need to worry about stumbling. You can be ~trippin’~ on your lawn instead.

Does artificial turf cause cancer?

Studies show no conclusive evidence linking fake grass to cancer. But why is there even such a discussion? What led people to believe that artificial grass can cause cancer?

Amy Griffin, associate head coach at the University of Washington, has worked with students for 24 years. In her speech, she described her experience with students and artificial turf.

She made a list of athletes who were diagnosed of cancer, and as of February 2019, that list has 260 names. 119 of them are goalkeepers. She says that since the beginning, goalies were always at 59-61% of the victims. It is thought that because goalkeepers are more in contact with the grass (they dive and slam their bodies on the turf) they are more prone to cancer.

Griffin acknowledges that “correlation is different from causation.” But, according to her list, the incidents of cancer rose as more playing fields of natural grass were changed to artificial turf fields (with crumb rubber infill.) This is the same rubber from the ground up recycled tires.

Griffin says that the EPA (Environmental Protection Agency) is in charge of keeping residents of the United States safe from environmental factors. They’re the ones who said that rubber tires are toxic. People can’t throw them out, can’t bury them, can’t burn them either. It’s illegal.

The government taxed the tires so it can afford to safely collect them. They have to get the tires out of the environment to make sure that people won’t do anything stupid with them. But it soon became a problem for the places collecting these tires. They became overflowing with the stuff. They had no place to put the unsafe, toxic, dangerous wheels. They ended up sponsoring the growth of crumb rubber to solve the waste problem. The government subsidized communities using crumb rubber fields.

In 2014, the state of California used $6.1 million to “help” parks and recreational facilities using these crumb rubbers. It allegedly helped both their waste problem and the community. Or so they thought. They ground up recycled tires and broke them into millions of pieces, introduced them into our communities so the kids can play on trash

She continues to discuss the RCRA law (The Resource Conservation and Recovery Act.) It is the law in charge of reducing the amount of waste generated and waste management. This law regulates toxic waste, but not its by-products. In turning tires into crumb rubber, different regulations apply.

Unfortunately, since these crumb rubbers when used as infill, get carried by waters to rivers, lakes, and coasts. They disappear into waterways, thus their disposal is not regulated. Not to mention the fact that these are so small that gushes of wind can definitely take portions of them. They get taken into the air—breathable by any human being in need of oxygen.

Don’t take their disposal into waterways lightly though! These crumb rubbers easily fit into mouths of fishes (that’s right! Fishes that we, human beings, eat!) and can potentially poison their aquatic environments. This poses a threat to all of us because if the water that we use every day is contaminated with toxic substances, we can definitely get sick. It may not always be cancer, but anything we do to plague the environment will definitely haunt us in some way.

What does crumb rubber infill have to do with cancer?

Hypothetically, these tiny pieces of rubber float in the air when the playing field is used by athletes. Much like dust resting on a book when you tap its cover, the dust spews into the air and into your lungs. Imagine a goalie diving to block a shot, rubber infill from underneath goes up in the air and into his face. He ingests them, or they stick to his skin. Since the rubbers are made from toxic materials, they negatively affect students and players on the field. No studies are yet to conclude this hypothesis. It’s only just that.

So why even risk it? You’re going to invest in your family time, picnics, and weekend activities. There’s no reason compelling enough for you to choose a known cesspool of toxic materials like crumbed rubber tires to lie on. Choose better materials, like quartz, sands and broken down stones.

Why is synthetic grass a cancer risk?

It’s not! If anything, the recycled tire rubbers being used for infill are the main suspects. Tires come from a mix of synthetic and natural rubber, carbon black (a petroleum-based material) and 4-10 gallons of petroleum products. Metals like cadmium, lead (neurotoxic! It’s harmful to your brain!) and zinc are also present. Some chemicals like dibenzopyrenes are also known carcinogens.

Even the chemicals the tires are exposed to during its life can also have a hand in its toxicity. 11 out of 92 chemicals found within crumb rubber have been identified as known or suspected carcinogens. Having this in your yard is a sure fire way to poison yourself. The good news is: infill is completely separable from synthetic grass! You can choose sand and broken down rocks instead!

So, is artificial grass toxic?

Generally, no. But of course, there is subpar quality synthetic grass in the market. These are dangerous! Fake grass is something you should get as far away from as you can! These can have amounts of toxins and lead. And since they’re fake, you have no guarantee that they weren’t made out of poisonous substances.

Are there synthetic grass in the market which are perfectly safe for you and your family?

Why yes, of course! You can do away with crumb rubber infill. You can drop unnecessary risks. Go for natural alternatives!

What is the best artificial grass for kids and pets?

King Turf offers toxin and lead-free products! Plus, it’s eco-friendly too! We don’t offer crumb rubber as infill; we go with sand and stone, which are all natural and already in the environment! Even if our infill gets blown away by harsh winds. Or driven by running water. You can sleep at night knowing that everything is okay for both your family and the world!